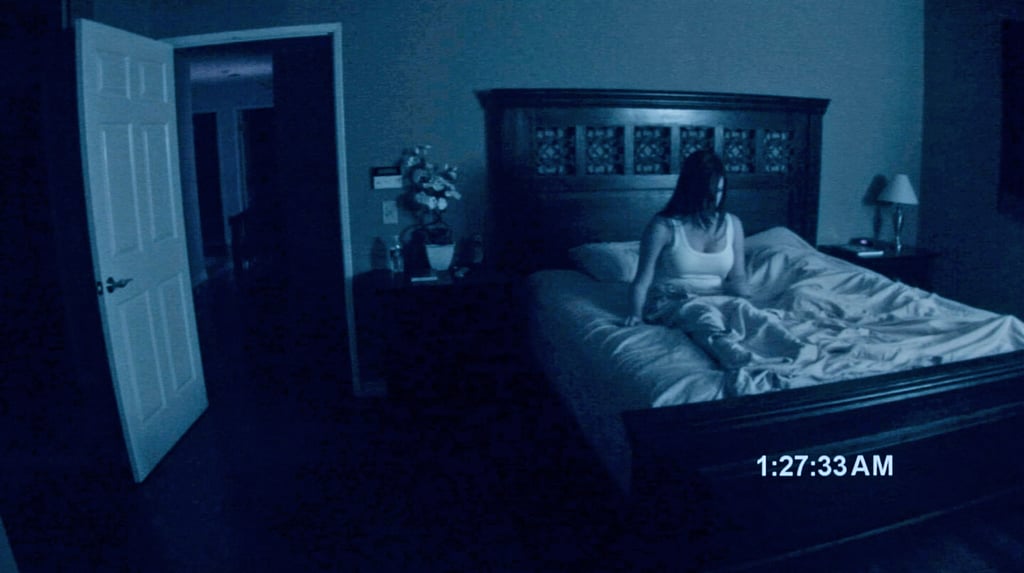 “I’ve been doing my research. I’m taking care of this. Nobody comes in my house, fucks with my girlfriend, and gets away with it.”

I remember when Paranormal Activity first dropped on DVD about a decade ago. I was eleven years old. I watched it with my sister, shrouded in darkness in the living room. We came home from Blockbuster, burnt some popcorn, and I stood on a chair from the kitchen table to reach the DVD player and insert the disc. It was a time in my childhood when all I knew about movies came from word of mouth and maybe a trailer on TV. People older than me would talk about Paranormal Activity like it was something legendary: the scariest movie of all time. It was a magical time when I could believe talk like that. With Rotten Tomatoes, smartphones, and movie trailer culture, we don’t learn about movies in the same way. Movies don’t seem like legends anymore. I miss that feeling a lot, watching Paranormal Activity with the feeling that an okay horror movie was some gift from the gods of culture.

I remember the trailer for Paranormal Activity seemed to tap into this mythology. The trailers would show audiences watching the movie instead of any footage from the film itself. People in the dark were screaming and throwing popcorn like nothing I’d ever seen at a theater. (After seeing the movie, which has one massive jump scare at the end, I later deduced that these commercials only had tons of reaction shots of the same single moment in the film: the only moment I thought was scary.) The movie also started a cascade of horror trailers copying this strategy, leaving the movie’s content “too scary” for trailers. And it worked, especially for found footage, where the bulk of the movie is B-list actors mumbling and joking around while walking around their house without many movie shots to tease in a trailer.

When I actually saw the movie, I hated it. I remember going around complaining about the movie to everyone I knew. “It’s just a lot of talking and then a jump scare.” I guess I was on my way to becoming a bitter film critic, because I do the same rambling and nitpicking today. It was a letdown to watch the movie for the first time, and watching it eleven years later, it wasn’t much better. It’s a decent low-budget movie: a found-footage slow burn about a young couple documenting weird phenomena in their house surrounding the demonic possession of the main character Katie. But the movie had built a legend around itself, similar to The Blair Witch Project. The main actors used their real first names in the film, and the film opens and closes with text that suggests the movie contains real footage. It was probably the last movie to terrify people into thinking found-footage horror can be real, book-ending the era of faux-nonfiction success that Blair Witch began. But to a child in 2007 with nothing but tall tales and mysterious trailers, watching the movie seemed like a cultural milestone.

We’re in a golden age of trailers. They’re more enticing and thoughtful and fan-driven than ever before. But I miss it sometimes. I miss feeling like the movies had a hold on us. You could put your guard down and go into something blind with the highest of hopes. I try to keep off Rotten Tomatoes and limit my trailer intake for movies I’m hoping to see, but something will never quite be the same as how things used to be. And Paranormal Activity reminds me of those times. I’m less afraid of the movies themselves and more terrified by how things have changed. But watching the movie today, after all these years, it made me smile to remember the anticipation I had for this movie as a kid. And that made me smile.